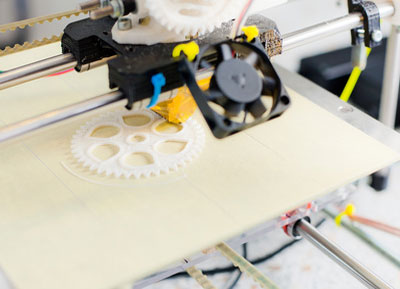 3D Printing is going to change the way we design, innovate and manufacture. Forbes estimates that by 2020 it will be a USD 5 billion industry. It’s an innovative method of making a solid three-dimensional object out of a digital file. It does this by applying very thin layers of plastic – measuring just a few microns – from the bottom up. Hence the term additive manufacturing.

Stereolithography (SLA) is frequently described as the ‘workhorse’ of the additive manufacturing world and the original “3D printing technique”. SLA is an additive manufacturing or 3D printing technology that builds 3D parts from CAD data using a liquid photopolymer resin and a ultra-violet laser to build parts one 2D slice at a time. The laser is fired at the surface of the resin, solidifying it into a 2D cross-section of the part being printed. The part is then moved down and a recoating blade sweeps across, depositing fresh material. The next layer adheres to the previous slice and the process repeated until the entire part has been built.

SLA has actually been around for 30 years. It was invented in 1984 by Charles Hull, who patented it three years later. The great advantage of SLA is that it gives you a fast, easy way to turn CAD drawings into real objects. In the past, it could take months to make a prototype of a part from a technical drawing. Now, thanks to SLA, you can do it in a matter of a few hours.

The sky’s the limit

3D printing (which includes the tried and true SLA) hit the news in 2013 when designs for the world’s first 3D printed gun were put online (and quickly taken off; the domain was shut down). But 3D printing has the potential of creating a host of extremely useful applications. Here’s a selection of recent innovations using 3D printing:

What’s your next step?

When injection molding is the ultimate manufacturing path of choice, one of the key costs is the preparation and machining of the steel mold used in routine production of the injection molded part.  In the past the decision to take this expensive step was often guided by machined mock ups at best.  The 3d printed part supports a preliminary test of potential customers and markets with multiple feature changes.  This allows the OEM to reach decisions on the product ranging from making small adjustments all the way to abandoning the project long before the high cost step of purchasing the expensive steel production mold.

Contact the experts at Permian Plastics, who will be delighted to discuss your application and select the right material and the right 3D process for your project.

FDA to Exempt Some Medical Device Class II, Class I from Premarket Notification